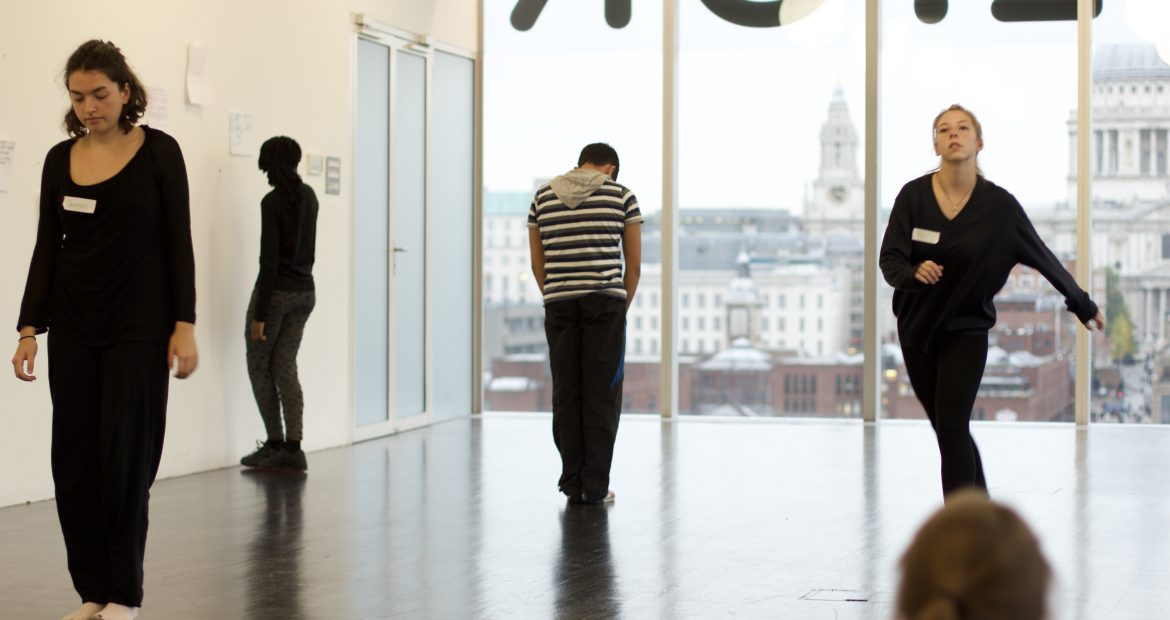 As part of my TATE Learning Research Associate position and practice-based-research through the Centre for Dance Research at Coventry University, I have been running a series of once-a-week morning movement practices at TATE Modern. In the early part of this year I spoke with Emily Pringle, Head of Learning at TATE about my interest to create an exchange as part of my residency. Having worked closely with Emily and Professor Pat Thomson as part of the Experience & Value of Live Art (2013-2014) I knew I wanted to return to some of that work in order to better understand my practice and the role dance can play in the museum. It was during that project where I introduced a daily movement practice for the group of learning experts and young people that had a unifying and dismantling of expected roles kind of quality and dynamics to it. I was interested to revisit that in a new context and several years later. A composite film of that project, created by the participants with artist Camilla Robinson can be found here. Project participant Katie Slee also produced a publication [PDF, 4.7 MB] to reflect on the many levels the experience addressed and developed .

The current movement practice as part of my research is one-hour (9am-10am) before opening hours of the museum on Thursdays and consists of a series of easy-to-follow (yet somewhat complex patterning) of movements repeated in the same manner every week. Culling from my training in Post-Modern Dance, Body Weather Laboratory, and Bartenieff Fundamentals the practice engages both internal and external awarenesses of the body within spatial and temporal contexts. It is done to music and everyone moves together at the same time (although not necessarily in unison, although there are moments of unexpected synchronicity).The mornings are open to any TATE staff or volunteer and have, up to now, been attended by TATE Learning staff. As part of my work with the Centre for Dance Research I will be reflecting on why my work in museums has been with Learning Departments, rather than Curation. I am interested to unpack reasonings as to what makes those departments more suitable for my work. In speaking, again, with Emily a week ago and after one of the movement sessions we discussed the core sets of beliefs of Learning such as: inclusivity, democratic practices and social justice. These are symbiotic values within my own practice, which makes sense as to why I am drawn, as a dance artist working in the museum, to Learning arenas. I might also add my interest in the idea of “spatial justice” and in reference to Ed Soja’s writing on Thirdspace and one of the core theorists (and former professor of mine at UCLA) whom I am looking at as part of my research.

Now, back to the movement series that began in early March and will run through till May. In early reflection, I am thinking back to my initial interest in the idea of a movement practice as a way to experientially question what it means to be a dancer in the museum. The idea of practice over product also resonates with me and is a key component of my work. More largely speaking, I was interested in practice as a way of being together in the museum and the kinds of expressions and discourses that might emerge from that space.

It has been insightful to witness the ways in which, over time in the morning, the room opens up as a space for practicing and sometimes talking while moving, followed by conversations about the body, work and post-moving sensations. On particular days when the Clore Studio, where we practice, is open to the Turbine Hall and/or other staff pass by and peer into the glass door and windows of the studio (one staff member coming in to sing along to the music we were playing). In these acts of looking and being looked at, there is a sensation (for me) that what we are doing might be contextualised as a kind of performance. At the same time, I often look back out and see the people’s gestures and actions as also framed by the outline of the door or entryway rendering their everyday gesture as similarly performed. Having studied with Yvonne Rainer the idea of everyday movement as performance rings true within this experiment. My thoughts are still very much in observation and reflective mode here. There are a few more sessions to go and I will continue to reflect back and write on my residency time at TATE and how it feeds into my larger research project of dance in the museum. More soon…