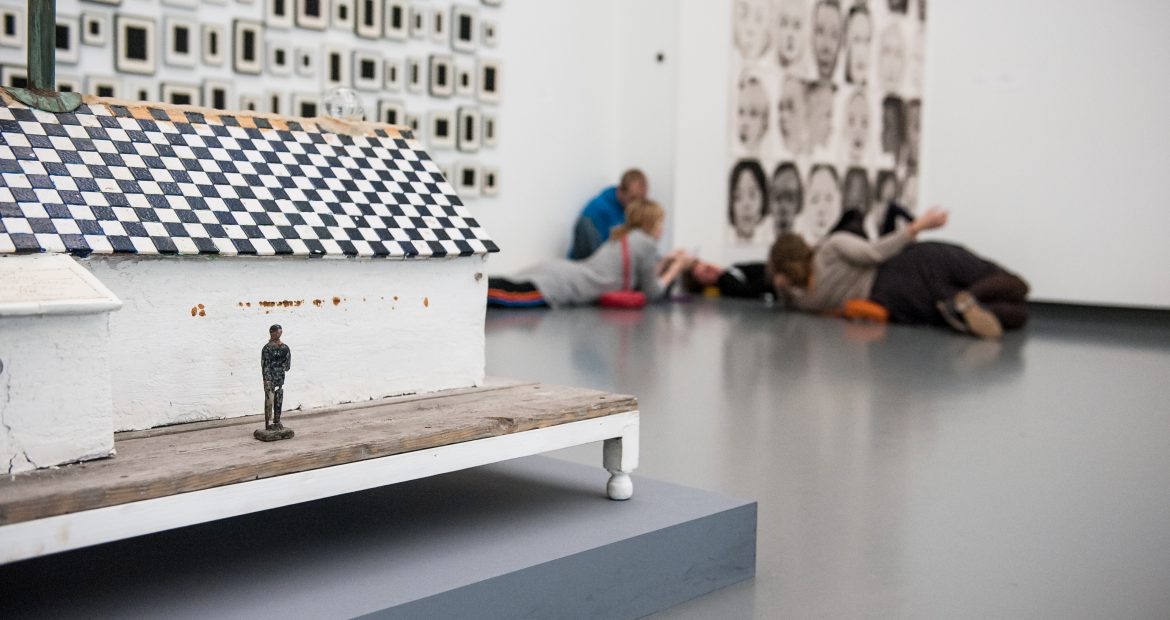 Embodying a Connection with Van Abbemuseum

I am just back from the Netherlands where I gave a talk called Moving the Museum in relationship to one of my projects that I was attending to there and  that has been in the museum since 2014. Punt.Point is a collaboration with architect Rennie Tang and was commissioned by the Van Abbemuseum in Eindhoven as part of their Storylines project in which they commissioned artists to create a tool for experiencing the museum. They created a “toolshop” where the visitors could access the projects and during the run of their 3-year exhibition of their permanent collection.

The experience of having a work in the museum for an extended period of time has been very informative for me and my practice. Below are some points of reflection and awareness that have emerged for me and in my looking back on the project as its initial 3-year run comes to completion.

A central component of my work with museums is the connection that I have with an individual or individuals in that institution. Usually a project emerges from an initial meeting and through the development of a professional relationship (and that can include aspects of friendship). This happens over the course of years and often results in multiple projects with the institution in which that person works and, as I will speak about later, involves processes of collaboration, debate, inquiry and discovery. The institution, itself, has been less of the starting point for projects, but – as I have recently discovered – also plays a significant role. This, too, I will speak about later.

Coming out of the building of relationships with individuals is the way of working together which, for me, requires collaborative discourse. I approach working with the museum (made up of individuals, artworks, values and approaches) as a collaboration. It is my interest to question where my practice as a dance artist meets, bumps up against, aligns with the practice of the curator, learning expert, etc. Having had the opportunity to work with individuals in curation and learning and each over multiple years of time, I come to value certain modes of working. Collaborative approaches gives me insight into where certain cross-over interests, concerns and issues can be addressed and how, through that process, something else might emerge. Something that challenges and has the potential (even if slowly and over time) to move thinking forward for my practice, dance as an artform at large, curatorial and/or learning approaches and the institution as a whole.

Through relationships leading to collaborative projects I have come to understand more and more the importance of having overlapping sets of ideals & identifiable concerns between my practice and that of the institution I am working with. I was not aware of this until working with Van Abbemuseum. Charles Esche, the museum’s director, has set forth a vision for the museum allows for a porousness between roles in the museum and an equality within that is inspiring. His interest is not in market-driven art collecting nor cultural entrepreneurship but on socially-focused creative opportunities to imagine new futures (both for the museum and the communities it serves). For example, the collection is organized not by chronologically or geographically but through a juxtapositioning of objects through thematic approach. Their next show will have a room entitled “Labour” that includes sub-themes of “movement and performance”.

Note: Van Abbemuseum is written about in Claire Bishop’s Radical Museuology and which has been helpful in my coming to understand why working in collaboration with those in the museum has been so enlightening and enjoyable for me.