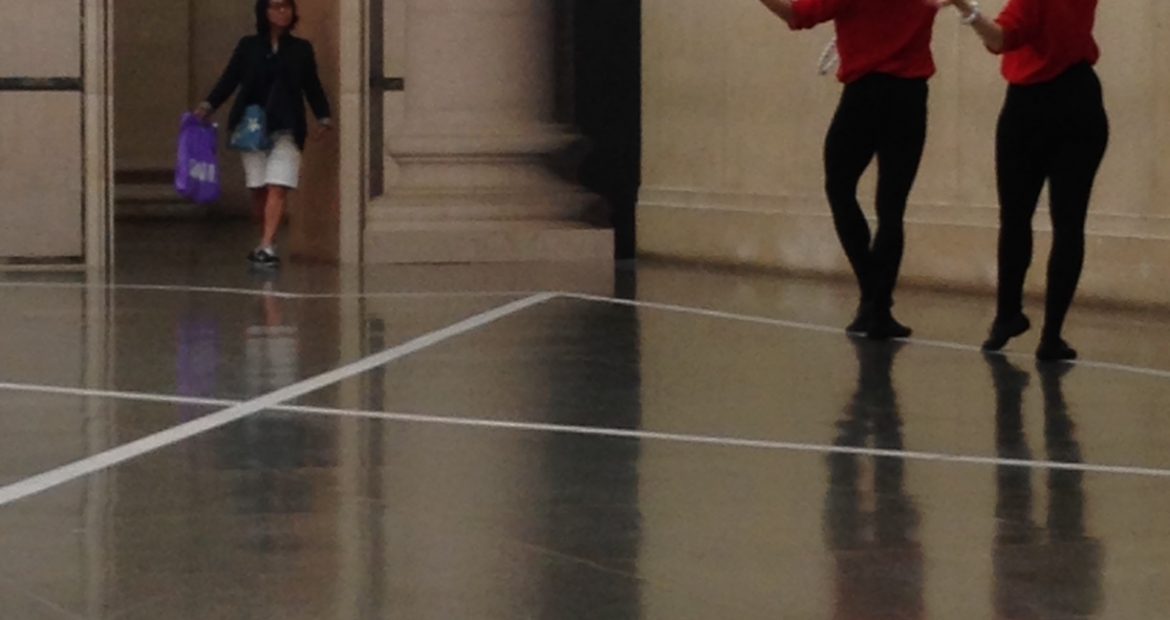 Walking into the performance in progress of Paul Bronstein’s “Historical Dances in an Antique Setting” the first thing I notice is the lack of density of any stationary audience that these dances would have. The next thing I notice is the somewhat unaffected look on the dancer’s faces. Then I look in more detail at the gesturing hands and bobbles of white strung around the necks and wrists of the dancers. Simple, elegant, confusing. Is this “historical” as Pablo suggests or is it a play on what that word means? I guess the latter given the “antique setting” is the museum itself with two illusionary walls adorned with vinyl stripped images of the exterior of the TATE.

It is one of those dances in museums that highlight the gestures and movements of its audience, perhaps giving them a chance to wonder at a dance, at a space and at their own participation in such events (one woman was mimicking the dancers movements). Yet, even in its pictorial beauty and critical aesthetic it feels as if something is missing. There is a ting of sadness in the air within this missing. I think what may be missing is the balance of exchange between audience and performer. Might dance be giving itself away a bit too much, leaving some void between the dancers and their onlookers. It feels all the more poignant with people taking photos of the dancers, walking on and barely giving real time exchange to what could be space of energetic, kinesthetic dialogue. If only there were chairs for this audience to stop, pause and to sit on. Perhaps, though, they would not then find themselves dancing as much.

Dancers seen in this performance were: