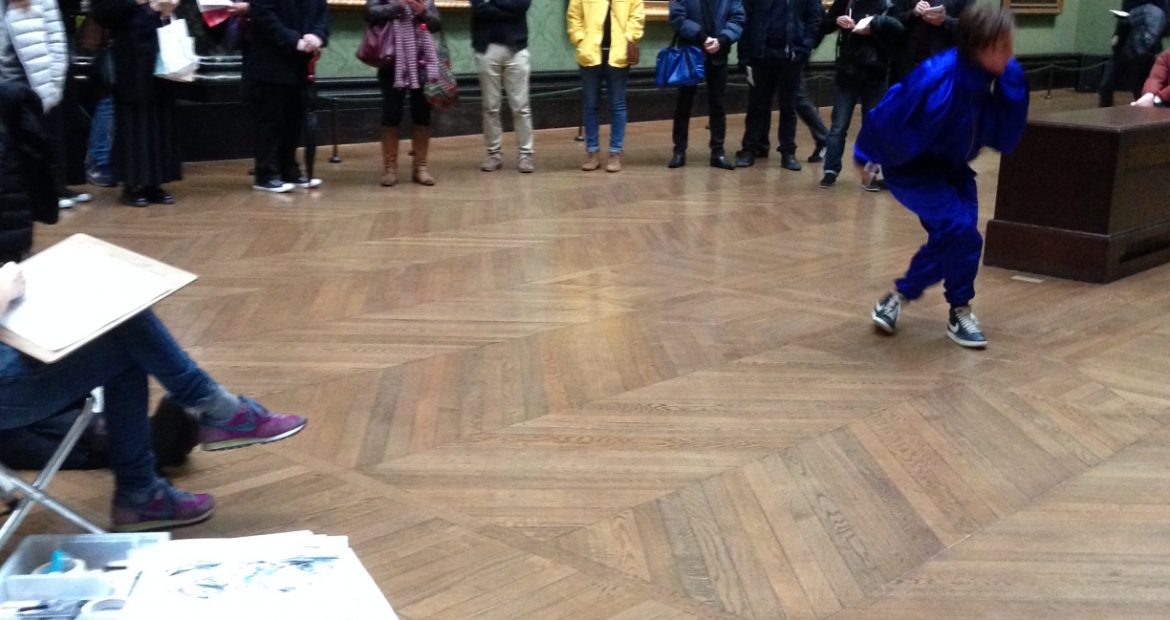 Dancing Museums is a partnership between five European dance organisations and eight museums. Its mission is to explore new ways of interacting with audiences. As one of those audience members yesterday (November 12th) I began to wonder what “interacting” might mean in today’s world. I ask this because my experience was more of one of isolation then inclusion. The dancers (some dressed casually and others in bright coloured costume) move in a room filled with paintings that demand my attention as they sit confidently and high on the wall. The dancing appears somewhat self contained, inside focused and remote. Onlookers (gallery visitors and dance fans) stand back viewing, make a static circle around the dancer (Lucy Suggate), and/or take a photo and pass by. There are gallery staff roaming around asking people to join in drawing the dancer (as one artist is already doing that as a planned activity and part of the performance) and to fill out a questionnaire on which one of the prompts is: “Do you think that choreography can offer an interesting alternative or written or verbal explanations as a means to engage with a painting?”. I am confused. I feel that I am watching dance, albeit a very contained one, but I am not clear on where the conversation on choreography is? I am also disturbed by the interest in how dance, an art form in and of its own right, helps us view visual art. What does this do for dance? Is my question.

This is not the first time I have felt these responses when experiencing dance in the museum so I am beginning to listen to this inner voice saying, “there must be another way forward”.  The Dancing Museums project, which began in June 2015 and will run through March 2017, is nearing its end. I am curious if the group (made up of dance artists and professionals from five European cities) is also questioning, not only the idea of “interaction” or what it means to put dance in the museum, but why we are doing it and what it means or does not mean for our field. Perhaps there was a missed opportunity as part of this event here in London to unpack such ideas, concerns and inquiries so necessary to the sustainability and thriving of our field of dance. Perhaps, as well, I missed such potential inquiries on the one day that I could attend. I am not convinced, though, that dialogues on the relationship between dance and painting, as many of the talks were focused on for this London stopover at the National Gallery, would allow for such reflective and critical thinking. The aim of Dancing Museums is to “highlight the role live performance can play in enhancing understanding and engagement in art”. Might I suggest that the word art be replaced with the word “dance” or “choreography”. Only then might we stop feeding into, being of silent service to and blindly following the agenda of (some) art institutions focused on the looking at art and in its own audience for that. Might we shift our viewing, of the dominant eye, and move down into the body and to sensation? Might we begin to think from our point of intelligence and skill as a dancing body? As a social body? Only then, and in times of increased divisiveness in our world, between humans and across space, can we begin to revisit and redefine “interaction” as “togetherness”. The kind that moves us beyond simplistic invitations to draw a dancer and provokes us with real questions of how we are being together. I look forward to going into the museum and encountering dance that brings us together rather than isolates us through the act of looking and not looking, through an ignorance of our field for the sake of old institutional aims and to open up new ways of being that are truly inclusive and felt. Dance can do this, we just are not there yet with our want for being in the (dancing) museum.

Photo is of Lucy Sugatte performing as part of Dancing Museums